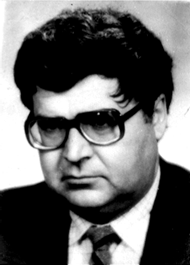 Vasil Popov was born in Sofia, Bulgaria, on January 14, 1942. His father was a Doctor in Philosophy and his mother, a leading French translator, was a Chevalier of the Order of Arts and Literature. From the early days of communism his father was prosecuted for his political ideas. This left lasting marks on Vasil’s youth and affected his career choices later in life. He was married to Alexandra and had two sons : Alexandar and Atanas.

Young Vasil grew up smart and outgoing with a broad range of interests and skills. He played the piano, and took the full university courses on physics and mathematics simultaneously in only three and half years. His father’s background made science one of the few apolitical career options available. In 1965 Vasil Popov graduated from the Department of Mathematics at Sofia University and took a permanent position at the Institute of Mathematics of the Bulgarian Academy of Sciences. He became a Senior scientist in 1974, a Full Professor in 1981, and the youngest Corresponding Member of the Bulgarian Academy of Sciences in 1984. Throughout his career he taught mathematics at the Sofia University. He also visited many international research centers, such as the Steklov Institute in Moscow, the University of South Carolina in Columbia, and Temple University in Philadelphia. Vasil Popov died in Philadelphia on May 31, 1990.

His research focused primarily in Approximation theory. His PhD thesis "Convex Approximation’’ was written under the supervision of Blagovest Sendov and defended in 1971. He received a Doctor of Sciences degree in 1977 with a dissertation on "Direct and Converse Theorems in Approximation Theory". Dr. Popov’s work included numerous publications and textbooks. He helped establish Bulgaria as an international scientific center by organizing multiple conferences and seminars. He guided more than 15 doctoral students, many of them continuing his work in Approximation theory and related areas in mathematics today.

Vasil Popov’s talent and creative energy made him a burning star that set early. His death was a great loss for the Bulgarian mathematics community, but his achievements and ideas continue to inspire many followers.